May 17, 2016 – Increased safety is an important part of the what the EMTRAC priority management system provides. At a basic level, a higher level of safety is achieved by detecting first-response vehicles and granting them signal priority, thus allowing them to more quickly respond to emergencies while reducing the potential for accidents from crossing vehicles.

However, the EMTRAC system is also used in many cities across North America to detect and grant signal priority to transit vehicles, which contribute to the effectiveness of transit as a whole. Transit ridership is increasing in many areas, and the EMTRAC system provides a comparatively low-cost way to increase schedule adherence.

Similarly, the use of bicycles for transportation is also increasing in many areas. To facilitate this changing nature of transportation—and to encourage active lifestyles—a number of cities are making a concerted effort to expand or improve their bicycle infrastructure.

Infrastructure improvements include dedicated and protected bike lanes, bike boxes (which allow bicyclists to get a head start at intersections), and bicycle traffic lights (which have specific symbols for directing bicycle-only traffic).

In addition to promoting an active lifestyle, these specialized infrastructures also help reduce both collisions and injuries. A 2009 review of 23 studies on bicycling injuries found that bike facilities (e.g. off-road paths, on-road marked bike lanes, and on-road bike routes) are where bicyclists are safest.[1] 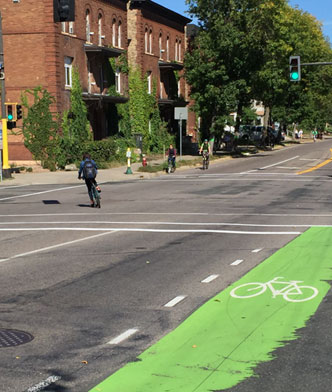 However, one continual challenge has been in detecting bicycles at intersections, making the task of bicycle-based signal phasing difficult at best.

The EMTRAC bicycle detection system enables cities to simplify the task of detecting bicycles, while also allowing them to apply the appropriate level of signal priority that is granted to bicycles (and other difficult-to-detect vehicles). The system utilizes the same intersection hardware that is used for both Emergency Vehicle Preemption (EVP) and Transit Signal Priority (TSP). The bicyclist needs only install the EMTRAC detection application on their mobile device.

One way EMTRAC bicycle detection increases safety is by making existing bicycle facilities more effective. As bicyclists are consistently detected and granted signal phasing, rather than having to wait for motorized traffic to “trip” actuated signals, their wait time (and their commute time) decreases—along with their frustration.

As a result, bicycling becomes a more effective alternative to motorized transportation.

The EMTRAC system has been used similarly by transit agencies. By using the EMTRAC system, buses and trains throughout North America are able to more effectively maintain schedule adherence. In these communities, public transit is a valuable asset, and transit ridership has increased as a result.

In regards to safety, bicyclists encounter fewer opportunities to consider “running” red signals when they’re consistently detected and the corresponding signal is able to react to their presence.

A Chicago Tribune article noted that bicycle infrastructure on one corridor increased bicyclists obeying traffic signals by 161 percent. The article quotes Lee Crandell of the Active Transportation Alliance as saying “It’s important to have infrastructure that speaks to people who are biking. Otherwise, they feel the roadway was not designed for them.”[2]

The EMTRAC bicycle detection system gives traffic agencies another way to do exactly that.