June 11, 2020 – When city managers explore implementing, or improving, signal priority for transit and first-response vehicles, rarely is it for low-congestion corridors. In most cases, the streets equipped with Transit Signal Priority (TSP) and Emergency Vehicle Preemption (EVP) functionality are also the streets with the greatest travel demand.

The EMTRAC system includes a number of features that enable traffic departments to effectively manage travel demand while granting signal priority with minimal disruption on these busy corridors.

With about 600,000 residents, Brampton, Ontario is the ninth-largest city in Canada, the second fastest growing, and one of the most diverse. This suburb of Toronto is close to Pearson International Airport, it’s a prime location for businesses, and it’s also a crossroads for travel to numerous colleges and universities. 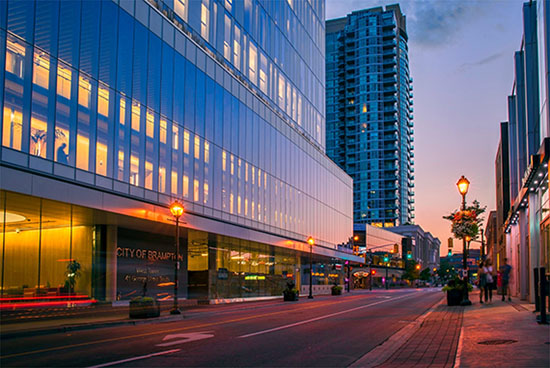 The need for effective transit operation in Brampton is high, and both the Public Works and Engineering Department and Brampton Transit have taken significant steps to minimize traffic congestion by increasing transit ridership.

In 2005, Brampton Transit did away with a meandering collection of bus routes in favor of a grid-based route system. They also introduced a two-hour transfer. In the following years, they were proactive in adding new routes to serve needed areas, such as Pearson Airport and new residential subdivisions.

Brampton Traffic Services, which is part of the Public Works and Engineering Department, manages system configuration and monitors performance for all EMTRAC-equipped vehicles.

Adaptive Priority is used to notify signal controllers when an approaching bus reaches pre-defined ETA timepoints during its approach (for example, when it is 90, 60, 35, and 15 seconds from the intersection). This enables the controllers to adjust phase timing to allow a green phase only when needed.

How successful has Brampton Transit been in attracting riders?

Future projects include the addition of two Züm BRT corridors, along with planned expansion of the Züm-corridor network and enhancements to existing Züm services.

Read more about other EMTRAC Traffic Features, and learn more about Brampton Transit.