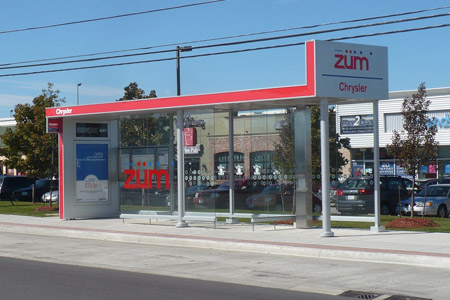 New BRT Station in Brampton, ON

May 24, 2011 – The March/April 2011 IMSA Ontario newsletter highlighted the new Bus Rapid Transit (BRT) service that is currently being expanded in Brampton, Ontario. This advanced BRT service was carefully designed to meet specific reliability and efficiency recommendations—and it is the first of its kind in North America.

We are happy to report that the EMTRAC Priority Management System was selected as the signal priority provider for this leading-edge service. In addition to providing conditional signal priority, the EMTRAC system also provides Automatic Vehicle Location (AVL) functionality, enabling monitoring personnel to track vehicle locations in real time. These features are described in more detail in the IMSA Ontario article below.

Located in the Toronto metropolitan area, Brampton has a population of over 480,000 people and is one of only 10 cities in North America to be designated as an International Safe Community by the World Health Organization. For more information, please visit the Brampton Transit, Brampton City, and IMSA Ontario web sites.

In 2007, the City of Brampton, in partnership with the federal and provincial governments, secured funding to implement Bus Rapid Transit (BRT) along three corridors within Brampton. On September 20, 2010, the City unveiled the result of that partnership: Züm, its new BRT service.

The service currently runs along the busy Queen Street corridor, from downtown Brampton to York University. It will expand to Brampton’s Main Street/Hurontario Street in the fall of 2011, and Steeles Avenue in the fall of 2012.

In order to accommodate Züm and ensure that the service would be reliable, efficient, and cost effective, the City retained a consultant to review the existing traffic management system and field hardware. The proposal scope required the consultant to review the current technologies available to the market and recommend a Transit Signal Priority (TSP) system to meet the City’s current and future needs. 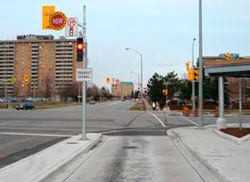 Recommendations from the review included:

The TSP system reduces transit vehicle travel times and schedule variability while minimizing the impact on other traffic. If the transit vehicle is running behind schedule, the system accommodates it by either extending the green phase or shortening the red time (reducing the conflicting green phase times), allowing the vehicle to obtain a green indication sooner.

In order to do this, the TSP system uses a combination of onboard and on-street system architecture. The onboard system receives priority requests from the transit vehicle’s Automatic Vehicle Location (AVL) system. The AVL system tracks the transit vehicle’s position relative to its schedule and can accommodate conditional parameters, such as levels of lateness and number of passengers onboard.

The on-street system takes advantage of features built in the traffic signal controller and TSP/EVP firmware. Specifically, the firmware includes the capability of using multiple ‘check-in’ detectors based on selectable time-points (in lieu of fixed distance points). In utilizing time-points, priority requests are transmitted to the traffic signal controller based upon the Estimated Time En route (ETE) of the transit vehicle. The algorithms used to calculate the ETE time points in the field and central equipment are what make this system unique to North America. Unlike detection zones that track the vehicle’s Estimated Time of Arrival (ETA) from a defined x/y coordinate, the TSP system’s time-points react in real time, to on-street congestion. Therefore, as traffic volumes fluctuate, so do the time-points.

In time for the arrival of Züm on Queen Street, a new transit terminal was built adjacent to the Bramalea City Centre. An exclusive transit lane was constructed to keep transit vehicles on schedule as they leave the terminal. Dedicated traffic signal heads with white bar transit priority indications and video detection allow transit vehicles to exit the terminal on a protected phase twice per cycle.

Since its official launch in September, Züm has been operating at near capacity and Brampton Transit has benefited from the highest monthly ridership numbers in its history. Feedback from riders has been positive, with many noting that Züm has set a new standard for public transit in Canada, if not North America.